Posted on October 23, 2017 by fairysockmother 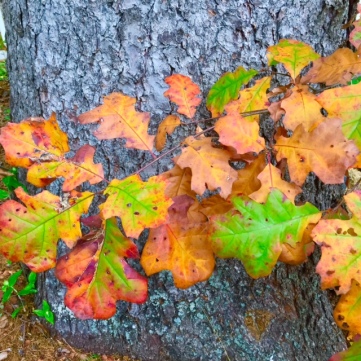 wind changed. It swooped down from the north, rustling the maple leaves and whispering through the spruce needles. Fallen leaves skipped and frolicked across the field, cartwheeling end over end. After weeks of waiting, Autumn finally made its way to Western Pennsylvania.

Fall has pushed relentlessly against a summer that seemed endless. Eighty degree days slipped gradually into seventy degree weeks, with a few scattered frosty nights. Trees remained green or shook off tired brown leaves to cover the ground. It seemed that all the beauty and wonder of fall might be postponed for another year. Last Friday, I saw the first hints of color – weeks later than I ever remember – and by Monday the hillsides were dotted by trees in fall shades. We seem to have lost our vibrant reds though, a result of the drought we had in September. The trees are clothed in subtler shades this year, soft mustard yellows, dusty rose, and delicious tones of pumpkin. I associate these colors more with the oaks, which often save their display for November. But this year, the maples have copied their tones tending toward pastels rather than splashes of brilliance.

Normally the turning of seasons reassures us, tapping into our genetic memories of a thousand brilliant autumns before this one. It was jarring when fall did not appear at its appointed time this year. The brown leaves falling hinted at trees dying and the awful suspicion that something was vitally wrong with the world around us. Even now, when fall colors have finally emerged, they are different, subdued, and hesitant. Tonight’s pounding rain may bring them down.

Our last two winters have been warm with very little snow. White Christmases seem to be a thing of the past. Living in the northeast has lost those sharp seasonal boundaries that regimented our lives so recently. What will children growing up today remember of autumn and winter – insipid ghosts of those former seasons? I, for one, welcome the colder temperatures and windy days, snowflakes, frost, and ice, for they comfort my soul. They reassure me that some things are still unchanged on this planet that we call home.

I am a Harper Voyager, UK author. Among Wolves, the first in an adult fantasy trilogy was released 2015. Grim Tidings followed in 2016 and Before Winter concludes the series in 2017! I have 19 traditionally published children's books including: the Abby and the Book Bunch series and a 2 Readers' Theater series both published through Magic Wagon, a division of the ABDO Group, at www.abdopublishing.com. My first picture book, "The Christmas Cats" was released by Pelican Publishing in 2011. I have reviewed YA material for VOYA magazine for almost 28 years. Follow me on Twitter as FairySockmother and visit my website: www.nancykwallace.com.
View all posts by fairysockmother →
This entry was posted in Writing and tagged Autumn, climate change, creative writing, Fall, nature. Bookmark the permalink.

2 Responses to Ode to Autumn