Posted on November 12, 2015 by fairysockmother

I track November’s sun as it skims the southern 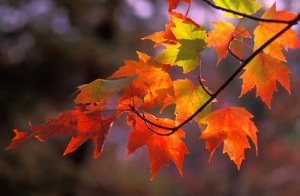 horizon. Where once it set behind our orchard in the northwest in June, it now sets behind the barn in the southwest, never high enough in the sky to generate any real heat. Today the sky is all grays and golds, spectacular rain clouds with sun gilding their occasional edges. It holds promise of something more than just a gray November day.

Yesterday on my way home, I saw a valley adrift with yellow Norway Maple leaves. I wanted to jump out of the car and run through them, throw their golden splendor above my head and feel it fall around me, like a child. Where else can one find gold unguarded and just waiting to be enjoyed?

Along the back driveway, the air is moist and earthy with the smell of decaying leaves, a smell so primal that it draws me into the woods unexpectedly, in shoes and clothes not designed for an adventure. The stark black tree trunks rock in the wind against the gray sky behind them. A solitary sassafras sprinkles the forest’s neutral tones with scarlet, orange, and gold. Near the blackberries, a cluster of sumacs offers their flaming compound leaves in a last explosion of riotous color. Then a gust of wind sends leaves whirling and branches cracking. Whipping through the spruce trees, it has the distinctive sound of the old year coming to an end, and the promise of snow, and darkness, and cold.

But today offers beauty enough for me to explore the woods on this fall day on the verge of winter. Soon, December will bring its own quiet beauty and the assurance of a New Year where the seasons will complete their circle of splendor once again for us to enjoy!

I am a Harper Voyager, UK author. Among Wolves, the first in an adult fantasy trilogy was released 2015. Grim Tidings followed in 2016 and Before Winter concludes the series in 2017! I have 19 traditionally published children's books including: the Abby and the Book Bunch series and a 2 Readers' Theater series both published through Magic Wagon, a division of the ABDO Group, at www.abdopublishing.com. My first picture book, "The Christmas Cats" was released by Pelican Publishing in 2011. I have reviewed YA material for VOYA magazine for almost 28 years. Follow me on Twitter as FairySockmother and visit my website: www.nancykwallace.com.
View all posts by fairysockmother →
This entry was posted in Uncategorized and tagged author' blog, creative writing, nature, November. Bookmark the permalink.