Spring brings the arrival of the Wood Frogs to my small pond. I’ve probably told you about them before but somehow the rhythm of nature is reassuring to me. Simple things like frogs, budding bushes, and growing grass seem very normal and comforting amid the creeping horror that’s encroaching on our country and has devastated the entire world. So, let’s talk about something pleasant. 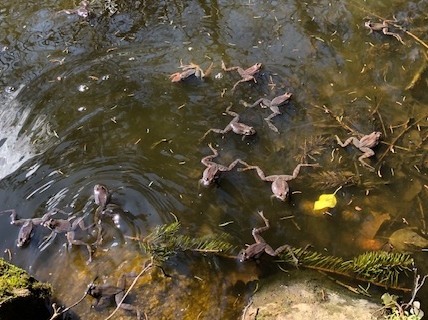 There is no missing the Wood Frogs when they arrive. Usually, I can hear their loud quacking clear from the driveway on the other side of the house. They are raucous little guys! Believe me they sound just like a flock of ducks!  They aren’t large frogs but they cover the surface of the pond which is approximately 14′ x 8′.

When my husband was alive the pond gleamed crystal clear and we had fish. I have not been able to keep up with the pump and the skimmer, so now I have frogs. The odd thing is that the pond and the frogs have created their own habitat. Yes, I have floating leaves and stray pine sprays but the frogs are thriving.

The Wood Frogs come for less than a week. They lay their eggs and move on. I have no

idea where. What remains are thousands of eggs. They do look like brains – or at least what I imagine a brain might look like! I do have some frogs who live in the pond year round but I haven’t identified them yet. I have several bullfrogs who answer me every time I use my snow shovel as a dust pan to clean up debris on the patio. Apparently, it sounds like a friend to him.

I recommend that you find some private spot away from people to just enjoy nature and breathe. God is still in charge of the universe and he knows us all by name. Our days are in his hands.

I am a Harper Voyager, UK author. Among Wolves, the first in an adult fantasy trilogy was released 2015. Grim Tidings followed in 2016 and Before Winter concludes the series in 2017! I have 19 traditionally published children's books including: the Abby and the Book Bunch series and a 2 Readers' Theater series both published through Magic Wagon, a division of the ABDO Group, at www.abdopublishing.com. My first picture book, "The Christmas Cats" was released by Pelican Publishing in 2011. I have reviewed YA material for VOYA magazine for almost 28 years. Follow me on Twitter as FairySockmother and visit my website: www.nancykwallace.com.
View all posts by fairysockmother →
This entry was posted in God, husbands, nature, Uncategorized and tagged frogs, frogs eggs, nature, ponds, water features. Bookmark the permalink.