Posted on February 25, 2017 by fairysockmother 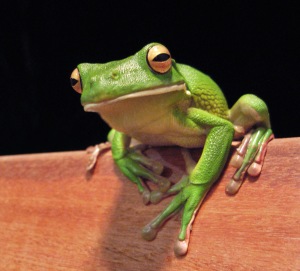 Just at dusk I walked down to put several letters in our rural mailbox. It was so lovely and warm that I sat down on the cushionless porch swing. The spring peepers were trilling their songs in our pond off the patio. They sounded really lovely like distant bells. The problem is that little froggies shouldn’t be peeping in February. My tulips shouldn’t be up and my roses shouldn’t be putting out new leaves. Today it was 70 degrees. Tomorrow’s low is supposed to be 14. If you are a plant, an animal, or a human this weather is difficult to cope with. My sweet little peepers will probably flash freeze tomorrow night and I’ll have to fish their little bodies out of the pond with a rake – yuck!

Three geese flew overhead, honking. I heard them long before I saw them and then they flapped over the porch roof and were gone, their calls growing more distant. Then one goose returned going the opposite direction. First, I thought he was lost and had missed his connection with the first group. Then, my storyteller persona kicked in and I thought “Ah, he’s going back for his mate.” I wait in anticipation of seeing the happy couple fly back to join the other geese but it didn’t happen. He must have been lost, after all. His calls faded away long after he was gone from sight. So much for happy endings. It would have made for a much more exciting blog had they been reunited! I’m sorry if you are disappointed but I was, too.

Darkness fell and the porch swing made its familiar grating sound. Suddenly, something answered it very loudly from the corner of the front yard by the fence. It was a cross between a croak and a quack and it got rapidly closer. It answered the porch swing’s every backward swing. I wasn’t sure whether to stay or run. It was dark enough by then that I couldn’t see anything out in the grass but the sound continued, getting louder and louder as it made its way step by step to the porch. I decided it was still February and I should go inside. Some days just don’t go the way you’ve planned.

I am a Harper Voyager, UK author. Among Wolves, the first in an adult fantasy trilogy was released 2015. Grim Tidings followed in 2016 and Before Winter concludes the series in 2017! I have 19 traditionally published children's books including: the Abby and the Book Bunch series and a 2 Readers' Theater series both published through Magic Wagon, a division of the ABDO Group, at www.abdopublishing.com. My first picture book, "The Christmas Cats" was released by Pelican Publishing in 2011. I have reviewed YA material for VOYA magazine for almost 28 years. Follow me on Twitter as FairySockmother and visit my website: www.nancykwallace.com.
View all posts by fairysockmother →
This entry was posted in Uncategorized, Writing and tagged creative writing, frogs, geese, nature, porch swings, porches, spring, weather. Bookmark the permalink.