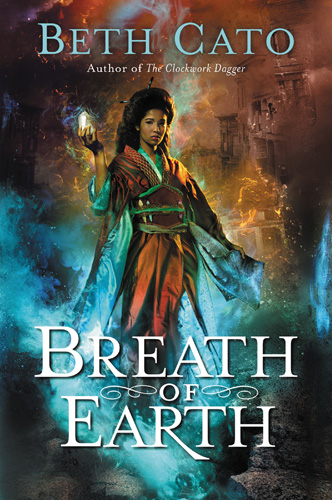 Happy Release Day for Beth Cato’s Breath of Earth!! The gorgeous cover only hints at the spellbinding story inside!

An Excerpt from Beth Cato’s Breath of Earth

In an alternate 1906, the United States and Japan have forged a powerful confederation—the Unified Pacific—in an attempt to dominate the world. Their first target is a vulnerable China. In San Francisco, headstrong Ingrid Carmichael is assisting a group of powerful geomancer wardens who have no idea of the depth of her power—or that she is the only woman to possess such skills.

When assassins kill the wardens, Ingrid and her mentor are protected by her incredible magic. But the pair is far from safe. Without its full force of guardian geomancers, the city is on the brink of a cataclysmic earthquake that will expose Earth’s powers to masterminds determined to control the energy for their own dark ends. The danger escalates when Chinese refugees, preparing to fight the encroaching American and Japanese, fracture the uneasy alliance between the Pacific allies, transforming the city into a veritable powder keg. And the slightest tremor will set it off. . . .

Forced on the run, Ingrid makes some shocking discoveries about herself. Her powerful magic has grown even more fearsome . . . and she may be the fulcrum on which the balance of world power rests.

This excerpt from chapter 1 offers an introduction to geomancy.

Whimpers and moans welcomed Ingrid to the junior classroom. Nearest to the door, a dozen boys half sprawled over their desks. A blue mist overlay their skin, and beneath that mist were the sure signs of power sickness—skin flushed by high fever, thick sweat, dull eyes. The rest of the class stared, their expressions ranging from curiosity to horror. Some of them still showed signs of very recent recovery in their bloodshot eyes. None of these boys was older than ten; the youngest was a pudgy-faced eight.

“There you are!” The teacher scowled, as if it were Ingrid’s fault he’d been so inept with his accounting. Biting her lip, she held out the bag. He snatched it from her fingertips.

The chalkboard laid out the terminology of the lesson, one Ingrid had seen taught dozens of times: hyperthermia, hypothermia, and the quick timeline to a geomancer’s death. These young boys experienced the hard lesson of hyperthermia. The last earthquake noticeable by the wardens had taken place three days before. These students had been directly exposed to the current and hadn’t been allowed access to any kermanite. As a result, they spent the past few days bed-bound in misery as though gripped by influenza.

Thank God none of them were as sensitive as Ingrid. Another direct tremor would cause their temperatures to spike even more, and could even lead to death.

The teacher adept pressed a piece of kermanite to a boy’s skin. He gasped at the contact. Blue mist eddied over his body, the color evaporating as it was pulled inside the rock.

If she could see the kermanite in the adept’s hand, the clear crystal would be filling with a permanent smoky swirl. It took a trained mechanic to rig an electrical current to tap the trapped magic as a battery. When the energy within was exhausted, a crystal turned dull and dark. Once that happened, kermanite became a useless rock.

The young boy sat up straighter. “Thank you, sir,” he whispered, voice still ragged. It would take him hours to fully recover.

Ingrid looked away, that familiar anger heavy in her chest. Wardens and boys in training carried kermanite openly from watch fobs and cuff links, or most any other accessory where stones could be easily switched out once they were full.

She had to be far more subtle. Her kermanite chunks clinked together in her dress pocket. She had to take care not to touch them today, or the energy she held would be siphoned away.

Ingrid loved this slight flush of power, because that’s what it was — power. It sizzled just beneath her skin, intoxicated her with how it prickled at her nerves. Certainly, if she absorbed any more energy, she’d use the kermanite. She didn’t want to feel sick, though she could hold much more power than these boys, or even the wardens. Mr. Sakaguchi said she took after Papa — that she stored power like a bank vault, while most everyone else had the capacity of a private safe.

When it came to her natural skill, Ingrid often regarded herself as a rare fantastic or yokai — not like garden ornamentals like the kappas or naiads sold to the stuffed shirts on Market Street — but like the geomantic Hidden Ones Mr. Sakaguchi so loved to research. She was a creature relegated to idle fancy and obscure mythology, and aggravating shoes.

Beth Cato is the author of the Clockwork Dagger series from Harper Voyager, which includes her Nebula-nominated novella WINGS OF SORROW AND BONE. Her newest novel is BREATH OF EARTH. She’s a Hanford, California native transplanted to the Arizona desert, where she lives with her husband, son, and requisite cat. Follow her at BethCato.com and on Twitter at @BethCato.