Posted on August 3, 2015 by fairysockmother 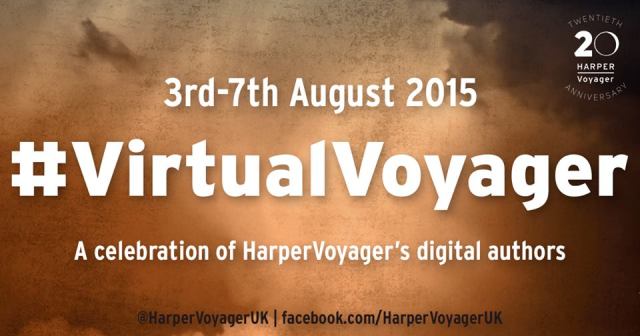 As part of #VirtualVoyager – a week-long celebration of Harper Voyager’s digital authors and their books, I had the good fortune to talk with my fellow author, Stephen Moore, from across the pond, in England.

e, you and I both write for children and adults, does the inspiration for books for those audiences come from different places or activities?

[A] That’s a great question, Nancy. You know, for me, the ideas come first. From there I can usually see the path the resulting story will take and the audience it might best be aimed at. Which means, essentially, the inspiration for books for what are very different audiences – children and adults – comes from very different places. For example, the inspiration for Graynelore came about when I discovered I have a direct historical family link to the infamous 16th Century Border Reivers. Family groups who lived on the English/Scottish borders, and considered murder, theft, blackmail and blood feud as all part of their daily lives. To do the idea justice, I knew instantly I was going to be writing for adults and not for children.

[Q] How does it work for you Nancy? And on another theme, we are writers of fantasy, and yet I can see we both have a love for things historical. If this time around it was Border Reivers for me, in your novel Among Wolves you’ve created a uniquely French parallel world. I’m intrigued. How did that come about?

[A] I find that situations often spark an idea for a children’s book. Objects, legends, or

random ideas tend to turn me toward the plot for a novel. Sometimes, someone’s name suddenly becomes a character in my mind. I always keep a file of future book titles. I doubt that I will ever live long enough to write all the books floating around in my head. Some people say “So many books, so little time.” I say “Too many plots, so little time!” Among Wolves began in a fabric shop. I saw a bolt of beautiful brown suede cloth and thought it would make a lovely cloak. That made me think of bards travelling the countryside to tell their stories, which made me think of cloaks embroidered with the symbols from various provinces where the bards had learned the tales of a particular region. Provinces made me think of France. If you are getting the idea that my mind is somewhat chaotic – you would be right. The wolves were not an integral part of the plot until I started researching French legends and ran across The Beast of Gevaudan. Of course, I tweaked the legend to suit my purposes.

[Q] Steve, the historical and family ties in your novel has left me dying to read it! How did you manage to balance history and fantasy? Were there some historical aspects that you had to sacrifice for the sake of the story? 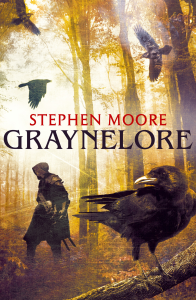 [A] Ah, the trick of it is, I haven’t written a book about Northumberland Border Reivers! I’ve written about the fantasy world of Graynelore. In true Reiver style, I’ve stolen their clothes, their lifestyle, their architecture, landscape and society, their gloriously despicable behaviour, and twisted it all to my own ends. That I’m actually living on their doorstep helped keep it real. And I did not so much sacrifice historical aspects as left them un-plundered… for now. And, of course, at its heart Graynelore is a fantasy; a very grown-up faerie tale not for the faint-hearted. If an unforgiving Reiver landscape dresses my world and gives me a sometimes brutal back story, it’s the tale of a mysterious moving Faerie Isle, bloodstained Faerie Rings and perplexing beggar-bards   that drive the narrative.

[Q] For its immediacy and colouring, I chose to tell my story first person, from the point of a view and with the turn of phrase of my central character. Nancy, was there anything in particular that made you choose the perspective of Among Wolves?

[A] I chose to write from Devin’s perspective because, as the main character of Among Wolves, I wanted the reader to see the story through his eyes. We first know him as a quiet, privileged, academic with a strong sense of right and wrong. As the youngest, he is the only one of Vincent Roche’s sons who is not already involved in the intimate mechanics of Llise’s government. He leaves home secretly questioning the written historical records that he safeguards as an apprentice archivist. His initial naivety is rapidly tarnished by the primitive conditions and inequalities he finds in the provinces.

[Q] The world of the Reivers sounds fascinating. Since I haven’t been able to read your novel yet, tell me about your main character. What are his motivations? What does he value most? What about his personality drives him as the pivotal character in Graynelore?

[A] My narrator and main character is one Rogrig Wishard. He’s a fighting-man, a killer, a thief, a blood-soaked reiver, a liar and a coward. How do we know? He tells us so. He solves his problems with his sword and his only loyalty is to his family. And you know what, he likes things that way. It’s only when he discovers he’s carrying faerie blood and starts seeing faeries for real that his world is knocked out of kilter. Fortunately, there’s more to Rogrig than meets the eye and the personal journey he takes during the course of the novel leads to some very surprising revelations. Out of all the many wild and wonderful characters I’ve created this stone-hearted man has got to be one of my favourites.

[Q] How about you Nancy, do have a favourite character? And why?

[A] Devin is certainly a favorite! After all, he is a librarian of sorts and idealistic to boot! Several readers have mentioned that they have enjoyed having a male main character who is not a warrior. I do tend to use young men as my main protagonists, partly because when I was young, men seemed to have more fun! They were cast in all the mysterious and dangerous roles while women were more passive. Of course that has changed, but I think that early programming made a lasting impression on me. I also include strong father figures in my books. My dad died very suddenly when I was only 11. My mum and I were extremely close but I think that wistful yearning for my father influences my writing to this day.

[Q] What about you, Steve? Do any ghosts or issues from your childhood influence your writing?

[A] Hey, does that make your librarian Devin, in some way, a kind of self-portrait? I digress… I have a faded photograph of myself when I was barely eight years old. I’m standing at the gate post of my home and I’m wearing my ragamuffin hitched up jeans complete with holes in the knees. That kid, if he read at all, read British and American comics like ‘The Topper’ and ‘Astounding Tales’, not books! When I first began to write, over thirty years later, I remember looking back on the children’s books I’d read by then (and loved) and thinking to myself, aren’t they all terribly prim and proper and (dare I say it) middle-class. Who is writing books for the kid in that photograph? With that thought in mind I wrote my first book Spilling the Magic. A madcap fantasy adventure complete with floating mountains and flying pigs, narrated by an ordinary young boy, and more to the point, written very much in his everyday English.

[Q] That brings something else to mind… When I write, sometimes it’s just purely for the adventure. Other times I find I have a theme or issue I’d like to try to explore within a story. How about you, Nancy?

[A] I definitely write for enjoyment, Steve! I agree with you that authors should write what they love to read. Among Wolves is exactly the type of book I would choose off the shelf in a bookstore or from Amazon. All my books are character driven. When I first imagined Devin, he was just a student in a huge archival library. As I expanded on him as a character, the rest just fell into place. I don’t use an outline when I write. I let my characters tell the story. I also don’t like to leave them alone too long because I’m afraid of what they’ll do next! Which brings to me my next question:

[Q] How do you write? Do your characters surprise you, as mine often do or do you use an outline?

[A] How long do we have? When I begin to write it’s with just a pencil and paper and an idea. There’s no starting at the beginning. No plan. I simply write down everything I know about the story I want to write. Words come in chunks or piecemeal. In essence, I go anywhere I like and I do anything I like when I get there. Nothing I write is a mistake and there is no writers block! When I get to the point where I’m ready to progress the book the scribbling stops and the laptop comes out. It’s only then that I begin to shape the book. And it’s not uncommon for me to redraft the manuscript a dozen times or so, to get it just right! As for planning, I like to draw word maps – for story-lining, geography, characters and so on – which develop as the tale develops. They give me an instant visual reference, when there’s just far too much stuff to keep safely inside my head. In a nutshell that’s how I write. And do my characters surprise me? When do they not…! When Rogrig Wishard began to tell his story in Graynelore I was shocked! I could hardly believe some of the things I was writing! Mind, when an author can surprise themselves with their work it’s a truly wonderful moment. You actually feel as if your writing has taken on a life of its own.

[Q] Nancy, I have enjoyed our chat so very much, I feel as if we could go on forever. However, if we have to stop, can I ask you one final question? If I was to sum up Graynelore for you, I’d say… “It’s as a story of divided loyalty. An epic fantasy. A grown-up faerie tale. A blood-soaked mystery! And, in its own twisted way, a kind of love story…” Tell me Nancy, how might you sum up Among Wolves to me?

[A] Your description of your book makes me want to read it even more!! I hope I can be as concise in summing up Among Wolves. How about: “Wolves and assassins, bards and betrayal, and one scholar’s search for truth in a world on the verge of revolution!

You can find Stephen Moore in many places online: