Posted on August 27, 2014 by fairysockmother 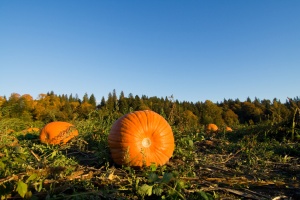 I walked tonight along the back driveway that skirts the woods, just as the clouds turned pink in the last light of the sunset. Even on August nights cool air seeps from our ravine like fog; Pennsylvania hollows hold a chill even in summer. The sassafras trees are already turning, sending red and orange leaves skidding across the path in the dying light.

The evening light has changed. The sun which at its apex set to the northwest above the neighbor’s horse pasture now hides its dying rays behind the tree lined peak just to the southwest. Silhouetted trees ornament its fiery embers with twisted limbs of black.

I gather green and yellow beans from the garden on my way back. The pumpkin vines have exceeded their perimeter, as usual, climbing and smothering the forsythia bush in a mass of leaves as big as elephant ears and varying globes of white, yellow, and orange. They spread relentlessly toward the barn, tendrils brushing the eaves in an attempt to gain the most hours of sunlight.

I head back toward the glowing windows of the house, my T-shirt hem cradling treasures from the garden. An enthusiastic insect chorus croons its song in the evening air. Cool air glides after me whispering “fall,” as the light leaves the sky.